Alzheimer’s disease is the most common cause of cognitive impairment in older adults and may be involved in at least 70% of all dementias. In the past, Alzheimer’s was considered a diagnosis of exclusion. Now we can make the diagnosis with greater certainty, by taking a careful history, measuring cognitive function, performing a directed physical examination and using specific laboratory tests.

Alzheimer’s presents with gradual, progressive short-term memory loss and word-finding difficulties. With aging, there is a progressive loss of short-term memory. Alzheimer’s begins very gradually and at the start the changes are mild and subtle. Nobody is quite sure when Alzheimer’s "begins". It may be "present" for many years before it becomes obvious clinically. When memory loss is clinically significant, it starts to impair function. At this stage, it is important to rule out reversible causes of cognitive impairment, such as depression, delirium, hearing loss and hypothyroidism.

The natural history of this disease is shown here. This figure shows the slope of progression of "typical" Alzheimer’s. There is significant variability because of differences in age, education level, language skills etc. 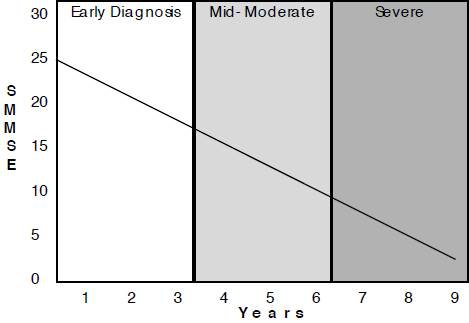 MMSE Scores, Stages of Disease and Areas of Impairment in Alzheimer’s Disease 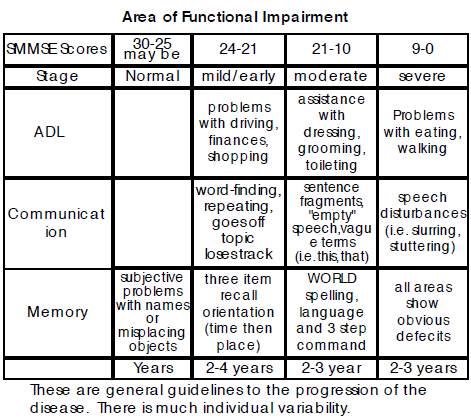 8.0 Care plan for Alzheimer’s disease (and other dementias)