Different dementias affect different parts of the brain cause a variety of cognitive deficits. Each dementia impairs cognition in its own characteristic way. The specific pattern of deficits provides valuable clues to the underlying pathology. Knowledge of these patterns together with the clinical findings, provides important diagnostic clues to the underlying cause of the cognitive impairment. For example, in Alzheimer’s the first deficit is in short-term memory and word-finding. Disorientation to time and place follow. Problems with language occur later in the disease. Alzheimer’s is a "cortical" dementia, so changes in gait, tone and swallowing occur late. Lewy Body dementia impairs visuo-spatial function and an early deficit is apparent in the ability to draw the fivesided figures. Lewy Body disease affects cortical (gray matter) and subcortical (white matter) structures, accounting for the early problems with tone and gait. People with vascular dementia often have diffuse problems in language, orientation and memory which seem to occur simultaneously. Vascular dementias have variable deficits depending on the structures affected. This is a cortical and subcortical pattern. The pattern of deficits not only provides important clues to the underlying pathological process, but the total score on the SMMSE quantifies the deficit and stages the disease process. This initial score will provide a useful baseline to measure the rate of decline and the effectiveness of treatments over time.

In Alzheimer’s Disease, the pattern of deficits is very typical and predictable. The first deficit occurs in short-term memory so the person repeats questions and stories. Then the person becomes disoriented to time: date, day, season, month and place. Later, the person has problems spelling "WORLD" backwards. Only then is language affected. These patients often deny that they have any problems with their memory and seem completely unaware of the severity of their problems. Gait or swallowing are not affected until the later stages, when the person is severely demented. If the person presents with changes in tone, difficulty walking with falls or difficulty swallowing early, then chances are it is not Alzheimer’s or there are other problems causing these symptoms and signs.

Gradual, progressive short-term memory loss, then nominal aphasia (difficulty with names, finding the right noun) - person repeats statements and questions over and over again. No changes in tone or problems walking or swallowing. MRI may show atrophy of the medial temporal lobe.

The typical pattern of deficits on the MMSE is shown. The numbers represents the order of deficits in each domain.

Figure. Typical sequence of deficits in all domains 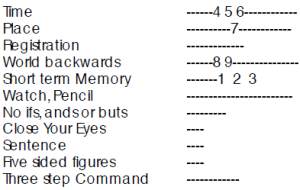 Numbers indicate the sequence of deficits in Alzheimer's Disease, e.g. the first three points are usually lost in short term memory, next in orientation to time etc.

The relationship between Alzheimer’s and vascular dementia is not fully understood. They share many common risk factors. The thinking in this area is evolving. The onset and progression of deficits in Vascular Dementia is more variable and less predictable than in Alzheimer’s disease. Many believe that isolated vascular dementia is rare. Vascular dementia frequently coexists with Alzheimer’s (mixed dementia) and may modify the progress of the deficits. There are no hard and fast rules, but early problems with language and visuo-spatial functions suggest vascular or frontal lobe involvement. This pattern of deficits raises suspicion of vascular involvement. 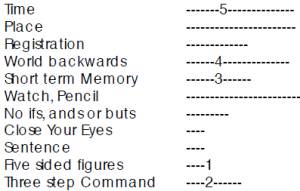 Problems drawing the figures or in following the three step command occur early and at the same time as problems with memory and spelling. The deficits tend to be diffuse, affecting many areas of function such as orientation, memory and language. Language deficits are usually seen much later in Alzheimer’s disease. The clinical clues to vascular dementia are step-like progression, history of transient ischemic attack, stroke, early problems with gait, early incontinence and depression. There may be subtle changes on physical examination such as positive Babinski, unilateral changes in tone, sensation or power. A MRI may show white matter changes or infarcts.

The characteristic feature of Lewy Body Dementia is hallucinations very early in the disease process. Typically, there is spontaneous increased tone. This looks like mild Parkinson’s (mild bradykinesia and rigidity), without the tremor. Hallucinations may be exacerbated when treated with Dopamine, so it should be introduced very carefully, if at all. Patients tend to walk "slumped over" to one side. They are often very paranoid, accusing their spouse of having affairs etc. They will see bizarre hallucinations, like children playing or people in the house wearing tuxedos etc. They believe these are real and will talk to them or complain about them. Symptoms fluctuate, so that one day the person is alert, oriented and appropriate, and the next confused, hallucinating, drowsy and lethargic. These patients fall, and are exquisitely sensitive to neuroleptics. If given neuroleptics, they become very rigid, lethargic, sleepy and experience a dramatic deterioration in function. These patients present with a characteristic constellation of symptoms and signs and often have characteristic deficits in the MMSE. They develop early visuo-spatial problems, so it is not surprising that the first deficit on the MMSE may be difficulty with the five sided figures. Later, disorientation to day and date, short-term memory loss and the inability to spell "WORLD" backwards, occur. Although not absolute, the pattern of cognitive deficit provides valuable clues to the underlying pathology. The history, physical findings and characteristic changes on the MMSE all help to diagnose their condition.

This pattern of deficits on the SMMSE, with the characteristic history and clinical findings support a diagnosis of Lewy Body dementia: 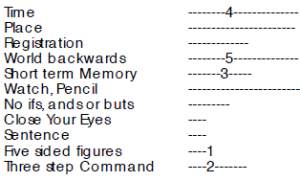 These patients may improve with anti-cholinesterases like Donepezil, Rivastigmine or Galantamine. For delusions, hallucinations and paranoia, a trial with low doses of Olanzepine may help the hallucinations, paranoia and delusions. They may get worse with Dopamine and this should be introduced carefully, if at all. They may tolerate low dose SSRIs if they are depressed.

Unlike Alzheimer’s disease, these patients often complain of memory loss. When asked questions they will often answer "I don’t know". When you get "don’t knows" or "it doesn’t matter", consider depression. When pressed, they may know the answer, but just couldn’t be bothered.

They will often complain of low energy, anxiety or somatic complaints in the bowel, saying that there is indigestion or a vague uneasy feeling related to the gastrointestinal tract. Somatic complaints seem refractory to treatment (e.g. arthritis). Some develop somatic delusions and become convinced that they have cancer or something physically wrong, but the doctor won’t tell them. They seem to perform much worse than you would expect from the degree of cognitive impairment. For example, a person with mild cognitive deficits does not wash or dress independently. This "disability gap" means they function lower than expected. In conversation, they do not have the obvious word-finding difficulties that the Alzheimer patient exhibits.

They will often experience anhedonia, or lack of pleasure in anything. They will have mood change that they will describe as a physical feeling of being unwell that descends like a cloud they can’t shake. This is often worse in the morning and gets better as the day progresses. This diurnal variation is a typical feature of depression.

Other vegetative signs like loss of appetite, loss of energy, sleep disturbance that is characterized by early wakening or difficulty falling asleep. They do not wake feeling refreshed; rather early morning may be their worst time. They lose libido and may even consider suicide.

Older adults with depression are at risk from suicide. In depressed, older adults it is important to ask about suicidal ideation. Ask "Did you ever go to bed at night and wish you weren’t going to wake up in the morning?" If they answer yes, ask "Did you ever think of killing yourself and ending it all?" If they say yes, ask if they have ever thought how they would do it. If they have thought of a method, such as hanging or overdose, or have suicidal urges e.g. to crash their car into another on the highway, then the suicide risk is significantly increased and they should be referred and monitored closely. If an anti-depressant is prescribed, it is important to advise patients and families that it will take some time to work e.g. three or four weeks. They should not stop taking the medication if it is not working in a few days or if they feel better after a few weeks. Also, tell them that if they get side effects and stop taking the anti-depressant, they must call you immediately to get a different medication. Many patients with dementia become depressed. Depression does not exclude dementia. Many people with dementia have depression that may be a feature of dementia and does not respond to treatment. In the practice of old-age medicine, the MMSE is a very useful test. But one cannot be dogmatic in using this test alone. The test must be interpreted in the context of other symptoms and signs. Dementia is a heterogeneous disease and these conditions are frequently mixed. For example, Alzheimer’s, Lewy body, vascular dementia and depression frequently co-exist. It is important to be aware that not every patient will fit neatly into a convenient diagnostic box. Many are not typical and will be "mixed". In these cases, gather information and keep an open mind as you follow their progress. The "typical" patterns with each disease are presented, but do not be too dogmatic applying these "rules" in practice. Many patients with medical problems have Alzheimer’s Disease and it is important to treat the medical conditions and the dementia.

All of the common dementias are progressive. At present there are no treatments available to stop or arrest these diseases, although there is a growing number of drugs that slow the progress and provide symptomatic relief. It is important to have a tentative diagnosis, stage the disease, start treatment and follow carefully to monitor response and progress. The MMSE is an invaluable tool in this process.

8.0 Care plan for Alzheimer’s disease (and other dementias)